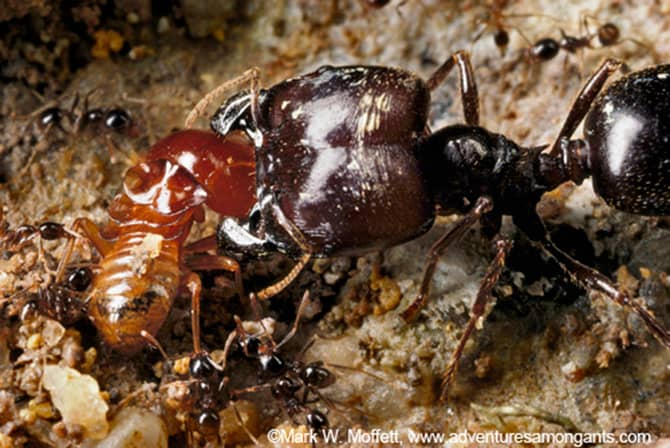 Organized battle, medical attention, triage and chemical weapons are all integral parts of any good war movie.  But this article isn’t about any war movie you’ve every seen .  Its about the ongoing battle of termites vs ants.  For millions of years ants have targeted termite queens and eggs as a food source. This has pitted colony against colony fighting for survival.

Ants and termites are sworn enemies.  These insects fight one another on multiple continents and in a variety of environments.  Casualties are huge, but the stakes are just as high.  These colonies are large and very organized.  Sometimes populations can be in the thousands or even tens of thousands.  When these two insects clash, they are organized into large armies and use every means at their disposal to succeed in their objective.

It would seem that the termite, which is significantly larger than the ant, would have the upper hand.  But this couldn’t be further from the truth.  Ants are ruthless and well organized.  If left unchecked, they can wipe out a termite colony with ease.  They are also very territorial.  When they find a mud tube from a termite colony, the attack begins.  Out sized and out gunned, but these ants over run their enemy with sheer numbers.

The Matabele ant, named after the fierce African warrior tribe from the same area, feeds exclusively on termites.  They attack at dawn and dust, and start by sending out scouts.  When the scout ants find a termite colony, these scouts will leave a pheromone path back to the ant colony.  The army of ants will follow these pheromone paths in columns of marching ants.  When they arrive, they will wait about 2 feet from the termite colony until the entire army arrives.   Then they attack.

HOW TERMITES DEFEND THEMSELVES

Termites are far from defenseless.  They are the prey, but they do put up a fight.  There are three castes in the termite colony:  the reproductive, the worker and the soldier.  It is the soldiers job to protect the colony from these cold hearted killers.  They are easily identified by their large heads and mandibles.  They can crush and slice through ants with their mandibles, and have plenty of muscle in their heads to put the squeeze on.  Many of them are also equipped with glands that have poisons, or sticky substances that can be used against their attackers.  Some soldiers will sacrifice themselves by breaking open their heads, releasing a glue like substance, causing the attacking ants to get stuck.

When ants attack the termite colony, the soldiers go into action.  The soldier’s large head takes up most of the space in the mud tubes, stoping the intruders from getting past him.  He will go to work with his mandibles and glands, doing everything he can to slow down the ants.  This is to buy time for the worker termites behind him to seal off the tube behind him.  Once a soldier goes to battle, his demise is inevitable.

Scientists have found that termites will actually put their oldest soldiers on the front lines.  The closer that you get to the queen, the younger the soldier termite surrounding her is.  This is a smart way for termites to protect the colony.  As termites age, they become weaker and slower.  So losing these termites first is what is best for the colony.

The army ant uses the element of surprise.  These ants don’t use scouts.  They simply amass a huge army and wipe out an enemy before they know what hit them.  When ants attack, they put their weakest and crippled on the front lines.  This ensures that the strongest ants survive to protect and fight another day.  The numbers can be staggering.  Take the marauder ant, for example.  They can send millions of these “weak” ants against an enemy.  They can take up a 100 foot wide berth!

After the weak ants finish their attack, soldier ants with large heads and huge mandibles will enter and finish off the exhausted termites.  But not all techniques used by ants are heartless.  Ants will care for their wounded.  If an ant is hurt, but can still walk, it will send out a pheromone signal that will tell the others that it needs help.  If it can’t walk, it will not send out the signal.  It will sacrifice itself.  Once the signal is heard, another ant will come and pick up the wounded ant and bring it back to the colony.  Here, other ants will lick the wounds of the ant.  It is believed that the saliva of the ants have a antiseptic nature to them.  Most of these ants will live to fight another day.

ARE ANTS A GOOD DETERRENT TO TERMITE INFESTATION?

In a short answer, probably not.  Termites stay under ground and are good at hiding from their predators.  This means that ants may never find the termite colony.  Also, some termites will ally with certain species of ants.  The ants will serve to protect them from other harmful ants by blocking tubes, much like the soldier termite.  Also, having an excessive amount of ants can be a problem in and of itself.  While it is true that termites do much more structural damage, ants can be a difficult pest as well.

If you are needing an exterminator in the Tulsa, Broken Arrow, Jenks, Bixby, Owasso, Sapulpa or Sand Springs area, contact us.  Here at TermMax Pest Control, we are here to help!